Primal Quest is Out Now!

And it’s FREE in PDF!

The world of Thaia

Is as old as life itself

But there are older things

And they are as mysterious as our world…

What is Primal Quest?

Primal Quest - Essentials, the Weird Stone & Sorcery Adventure Game, presents a streamlined set of rules for adventures in a mythical stone age world where humanity survives side by side with dinosaurs, aliens, and creatures more ancient than the world itself. Playable by 2 to 9 players (or more), it can be played for 30 minutes to a few hours (normally 3-4 hours).

In the game’s 28 pages you will find not only a complete ruleset with streamlined mechanics combining the spirit of the early games of exploration and fantasy and the dynamism that contemporary game design brought to the table, but also a mini hex-crawl that unveils the world of Thaia, a mythical stone age setting of mystery and adventure.

Primal Quest - Essentials is a creation of the gold Ennie Award-winning (Halls of the Blood King - Best Adventure of 2021) game designer Diogo Nogueira, and features the work from a team of creatives from around the world (especially from Brazil, from where Nogueira creates). This is Nogueira’s 9th game in a body of work that includes Solar Blades & Cosmic Spells, Sharp Swords & Sinister Spells, Lost in the Fantasy World, Screams Amongst the Stars, and more.

Primal Quest - Essentials can be acquired at https://diogo-old-skull.itch.io/primal-quest-essentials for FREE (it’s a pay-what-you-want product). Don’t be mistaken though, it’s a professionally developed game—we just want to make it as accessible as possible!

Don’t forget to check out The Cave of Our People, Primal Quest’s introductory adventure. It is a multimedia adventure in which the player characters go through a psychedelic dreamcrawl, eventually sharing their journey with their tribe—and all of us—through cave paintings the players draw themselves!

Primal Quest - The Cave of our People introductory adventure on itch: bit.ly/PQADV

The primary art & promotional assets for Primal Quest can be found here: https://drive.google.com/drive/folders/1G0GpvXgrgyK9ElxwwQ9dbq2ZOsn-TBJl?usp=sharing

Our team of core contributors includes:

I’ve always been obsessed with dinosaurs. When I was a kid, I wanted a velociraptor as my pet. Dogs and cats seemed so… boring. But, alas… you cannot get a velociraptor as a pet (nor as anything I guess). That’s why I made Primal Quest!

Primal Quest was born from my passion for so many things. My passion for game design, which made me work tirelessly to create something that combined the spirit of the classic fantasy games that I love with the flexibility and dynamism of contemporary game design. My passion for pulp fantasy stories with courageous and roguish characters that embark on apparently innocuous adventures to later find out they (or even the world) are in grave danger. My passion for connecting with amazing people that I got to know because of gaming; I got to work with incredible people that are not only talented, but generous and love their work too. And, finally, my passion for dinosaurs! Roooaaar!

I really believe this is my best work to date. I do hope you enjoy this game as much as I've enjoyed working on it.

What People Are Saying

"In a crowded field of rules light games, Primal Quest Essentials really stands out. Super intuitive mechanics are juxtaposed against a wild and weird setting to create a unique experience that is truly PRIMAL."

"Primal Quest delivers like the discovery of fire. It’s an absolute joy to learn. The use of tags in character creation to drive the story is refreshing, and the hex map is wild, dangerous, and fleshed out in a way that should make every game designer sit up and take note."

"Stone meets a brutal, fast and light rules set, and sorcery meets a freeform and modern approach. All this in a weird and cool stone age setting. Worth playing it, checking it out and getting inspired by."

"Diogo's games have that pulsating energy of pure creativity. Rad to the Jurassic bones."

“Primal Quest has reawaken that child-like desire to adventure in the pre-historic! As I read this gem; I find myself transported to a world before time, ready to see what my stone tools can do for me in these savage lands. Diogo has done it yet again and I feel that this game is helping usher in a new era of tabletop gaming experiences! Buy Primal Quest now!”

“In an increasingly busy world, Primal Quest Essentials provides designers and Referee’s with an easy to use and easy to create for toolkit for a fantastically stylized Stone Age setting!”

"Primal Quest finally gives me the tools for the game I never knew I wanted: a world inspired by the joy of classic Moon Boy and Devil Dinosaur comic books is hiding just below the surface of this fabulous creation!"

"Few games kick this amount of prehistoric ass. Grab a bone spear, gather your friends and get eaten by a T-Rex. Fun times!"

If you have additional questions, would like to schedule an interview, set up a time to play with us, or have any other questions please feel free to reach out via email to: diogoarte@gmail.com 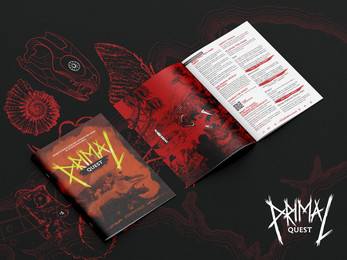 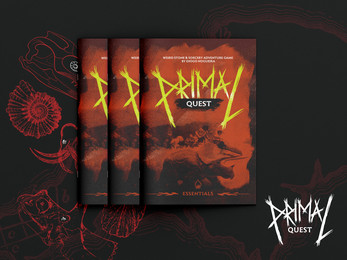 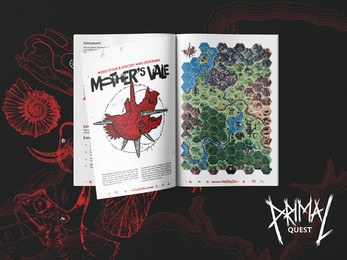 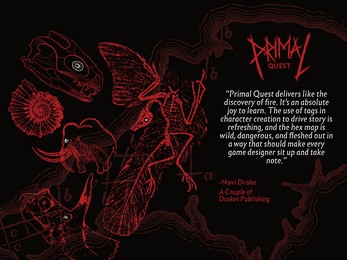 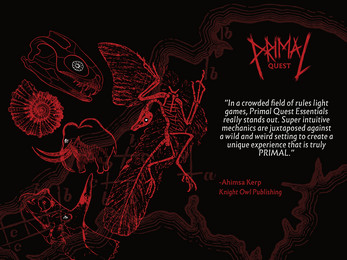 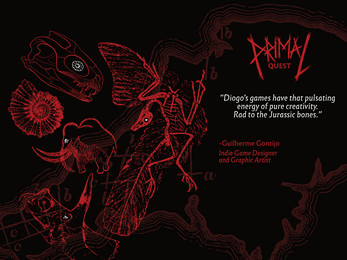 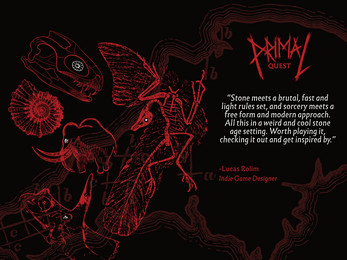