Primal Quest - Essentials is a streamlined set of rules for weird stone & sorcery adventures in a mythical world where humanity survives side by side with dinosaurs, aliens, and creatures more ancient than the world itself. 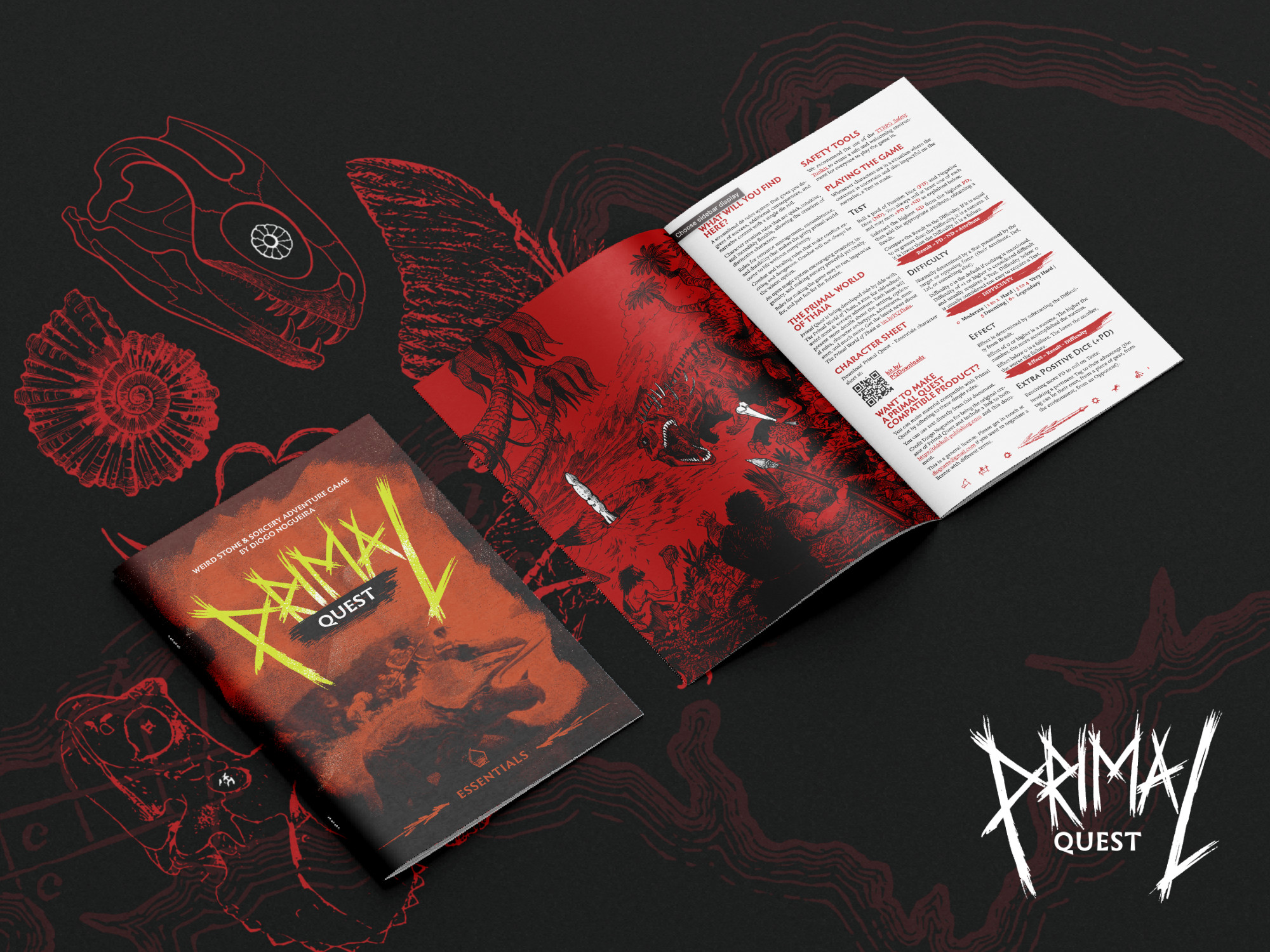 What Will You Find Here? 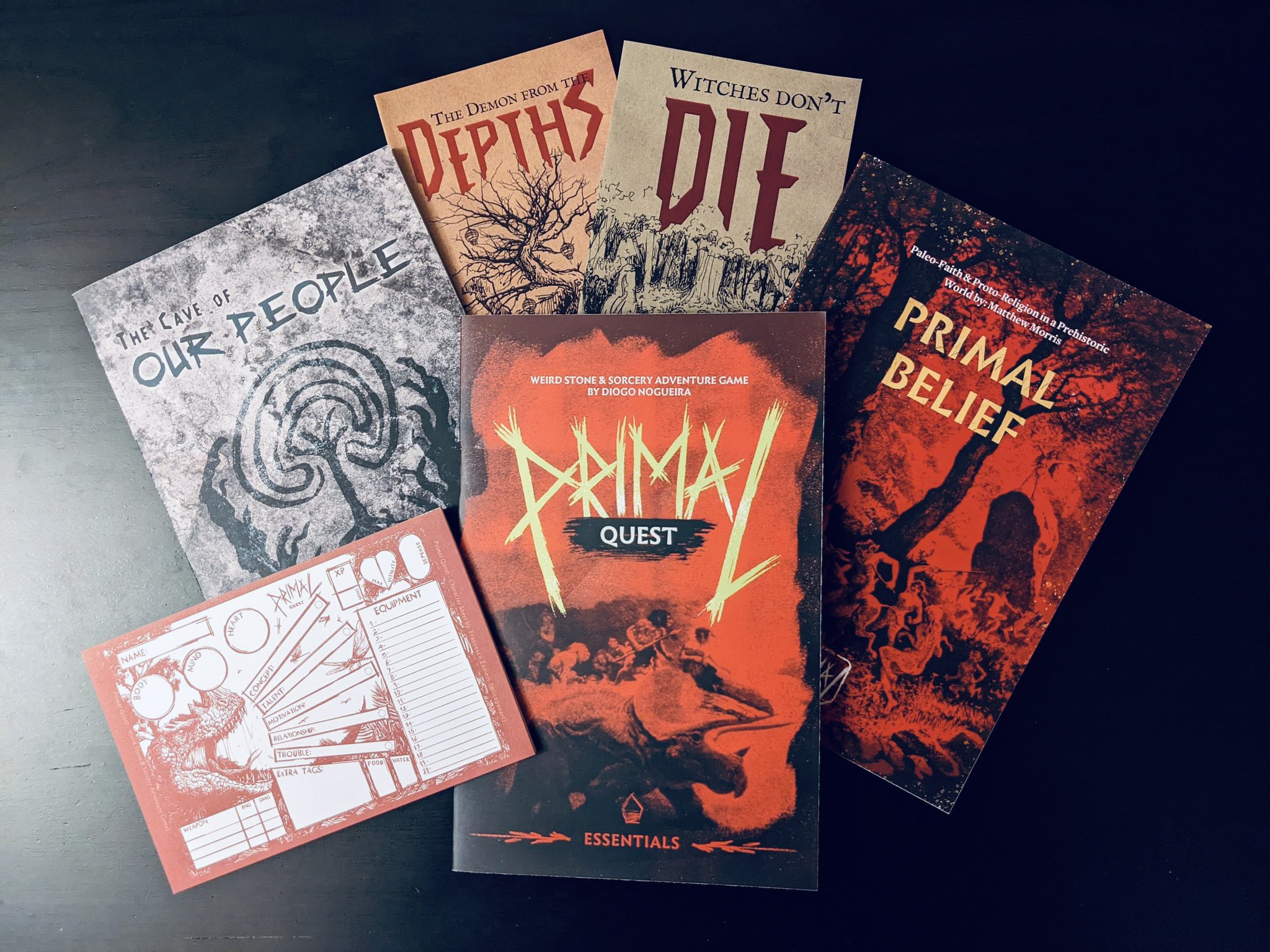 GET PRIMAL QUEST IN PRINT!

Both the Primal Quest - Essentials and the introductory adventure, The Cave of Our People got printed in full color, in a high quality printer.

Buy Primal Quest - The Cave of Our People: https://www.exaltedfuneral.com/products/the-cave-of-our-people

You can make material compatible with Primal Quest by adhering to these simple rules:

You can use text directly from the game's SRD document available in the following languages:

Credit Diogo Nogueira for being the original creator of Primal Quest and include a link to both this document and to https://oldskull-publishing.com.

Make use of the Primal Quest - Compatibility License and Logo here.

This is a general license. If you want to negotiate a license with different terms, please get in touch at diogoarte@gmail.com.

We recommend the use of the TTRPG Safety Toolkit to create a safe and welcoming environment for everyone to play the game in. 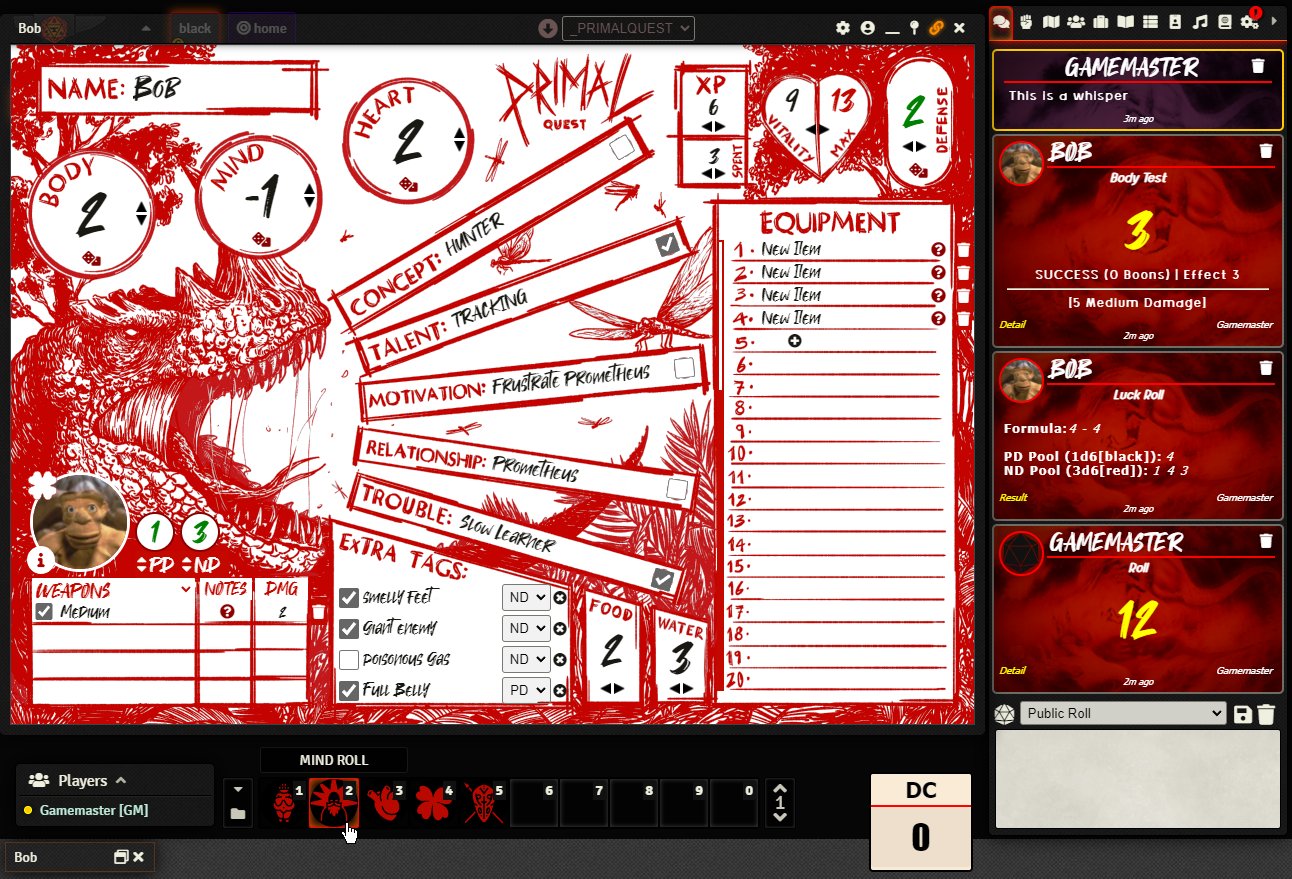 You can also download this module below and use it on FoundryVTT to play Primal Quest online! For FREE!

Get The Cave of Our People!

The Cave of Our People is an introductory adventure for Primal Quest in which the players will end up making a drawing of the adventure events themselves to mark their #Journey! 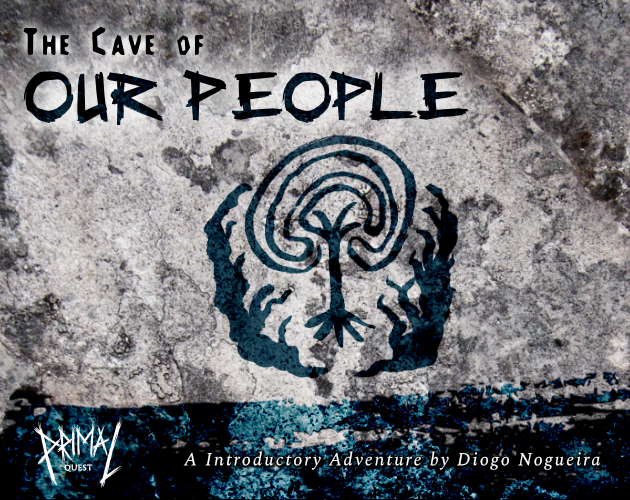 I am hosting a Game Jam form May 15th to June 30th every year to encourage people to make games with the Primal Quest system and setting!

Check Out the Primal Quest 3rd Party Collection Too!

2023 is the year of Primal Quest. I believe it could be the next big thing. I look forward to seeing even more 3rd party content. Maybe even some cross collaboration with some other TTRPG platforms? PQ x Troika...PQ x 9 Lives to Valhalla.

I would very much like that! There’s a lot going on for Primal Quest behind the veil, but  it’s annoyingly taking a lot of work to finish stuff!

Collaborations would be amazing. I had an idea for a Mothership/Primal Quest module with xeno-trex creature.

A Mothership/Primal Quest module would be amazing!

I heard a rumor that a solo mode is coming. Any idea of the timeline?

It's written and it's on editing. Cover is being done by Nicolás Giacondino.
You can check the draft text here: https://docs.google.com/document/d/1EP5g3rMItIjUgYTPGBIlUS8vGPsAqJEK/edit?usp=sh...

This game is a very impressive! Excelent for veterans and initiants!

Thank you very much. I have to say I am very pleased with it. Very simple yet can do many things and is very versatile. Easy to play but can take a while to explore everything, and the possibilities are endless. :)

As a new itch user, it was not obvious to me how many players this game supports. I’m really new to TTRPG, is this 2+ players?

sorry for the delayed reply. This is a game best played with 3 or more people.  But we are making a supplement for Solo play as well!

Great game. I have just one little remarks. There is a little typo at the start of the Equipment paragraph with a missing space (thisdoes)

I am waiting for more stuff for that game !

noted! I think we fixed it!

cool. i bought the cave scenario and i'm waiying for my kids to play it. i can't wait for the zine to be published.

Primal Quest is an osr stone age ttrpg with an easy to learn system, beautiful lurid red art, and a complete hexcrawl included.

The PDF 30 pages, and those 30 pages feel extremely meaty.

Lore-wise, Primal Quest takes place in a world where early humans and dinosaurs co-inhabit the earth. Fire and flint are new technologies. Humans congregate in small bands. And the world is violent and strange.

System-wise, Primal Quest uses sort of a weird core mechanic. To resolve a check, you roll a pool of positive dice and a pool of negative dice, count only the highest, subtract the highest negative from the highest positive, and then compare the remainder + Attribute against a Target Number. Dice are d6s, so as the pools get bigger, the odds of rolling a net 0 get higher. Rolling 6s on positive dice does generate a currency that lets you influence rolls and make them easier, but rolling 6s on negative dice generates a currency that lets the GM make your life harder. This feels to me like it's almost on the cusp of being diceless, but it's definitely a stable system and fiddling with the currencies feels fun.

Character creation is simple and solid. You have three attributes (body, heart, mind) and assign a small pool of points between them. You also define who your character is, what they care about, and what holds them back. Equipment is a little more complex, and you track torches, rope, food, water, etc, but carrying capacities are high and the penalty for going overburden isn't too onerous.

Trade is interesting, in that money is nearly unheard of so mostly you're bartering with resources, but the resource values for a lot of common stuff aren't defined. This kind of turns each exchange into an in-character assessment of whether the trade feels fair, which is flavorful and neat.

XP is pretty granular. You gain points often, simply by interacting with the game's systems, but you need a lot of points to buy advances.

Combat uses the same core dice system as the rest of the game, but also allows you to move forward and back in range bands.

Magic is relatively freeform---you combine a few keywords, tell the GM what you're trying to do, and the GM adjudicates the effect.

For GMs, there's quite a few resources in the book. There's a link to a safety toolkit at the start, there's advice on how to tailor your GMing to the system, there's reaction tables, rules for exploration and camping, and again there's a full hexcrawl scenario just waiting for you to run it.

The scenario, Mother's Vale, is beautifully mapped and has a nice balance between points of interest and empty tiles. The plot is very open-ended, but there's lots of trouble to get into and different communities to interact with, as well as a good helping of wild creatures to fight. If you like games like Skyrim and Fallout that just drop you into a huge sandbox and let you explore, you'll enjoy the feeling of this scenario.

Overall, Primal Quest Essentials is a great, meaty, lightweight game delightfully ahistorical stone age pulp. If you like old school games that experiment a bit with their mechanics, and especially if you like flinging spears and chanting fireballs at giant dinosaurs, give this a go.

Thanks a lot for the deep review of the game! Would love to see your impressions after a few games!

Is this game getting a OldSkull engine version too?

Unlikely, but who knows. I plan on adapting it to More Borg, DCC RPG, maybe 5e? But would hire people to do so.

This is the Stone & Sorcery game you never knew you needed it!

The system is simple but solid and the setting is amazing!

Now go get your bone club to smash some dinosaurs!!!

any chance for a physical print? this is so beautiful! great work on all of the design.

absolutely! Print run is coming through Exalted Funeral in a few weeks!

Awesome! Will we get an update here notifying us?

I don’t know if you came up with this system for Primal Quest or Sword Quest but it’s so cool and weird. You have two different color dice and from seeing them you instantly get the feeling that this is gonna go really well, or really bad

I came up just thinking about cool ways to play with d6 and made Sword Quest for a one page RPG Jam and expanded it with Primal Quest! Quite proud of this one. I think it’s the best system I’ve made until today.

Hey Diogo, I was trying to join your Patreon to get the World of Thaia updates, but the links I am finding don't bring me to  a proper creator page, and the search function on patreon is also failing me. I feel dumb, please send help.

Hey, I am sorry! I don’t have a Patreon anymore. I couldn’t make it work when I tried the first time. I will try again someday. Sorry if I still left links somewhere.

is there any solo plans?

Certainly, if I can I will contact some designer with solid Solo experience to work with on some Solo Quest rules!

instant buy-can't wait to check it out in more detail. Is this something you plan on eventually putting in print?

Thank you for checking this out! And yes, print copies will be available soon from Exalted Funeral!

Looks like there may be a small issue with the … - RED.pdf character sheet. Ever time I try to download it I get an error. 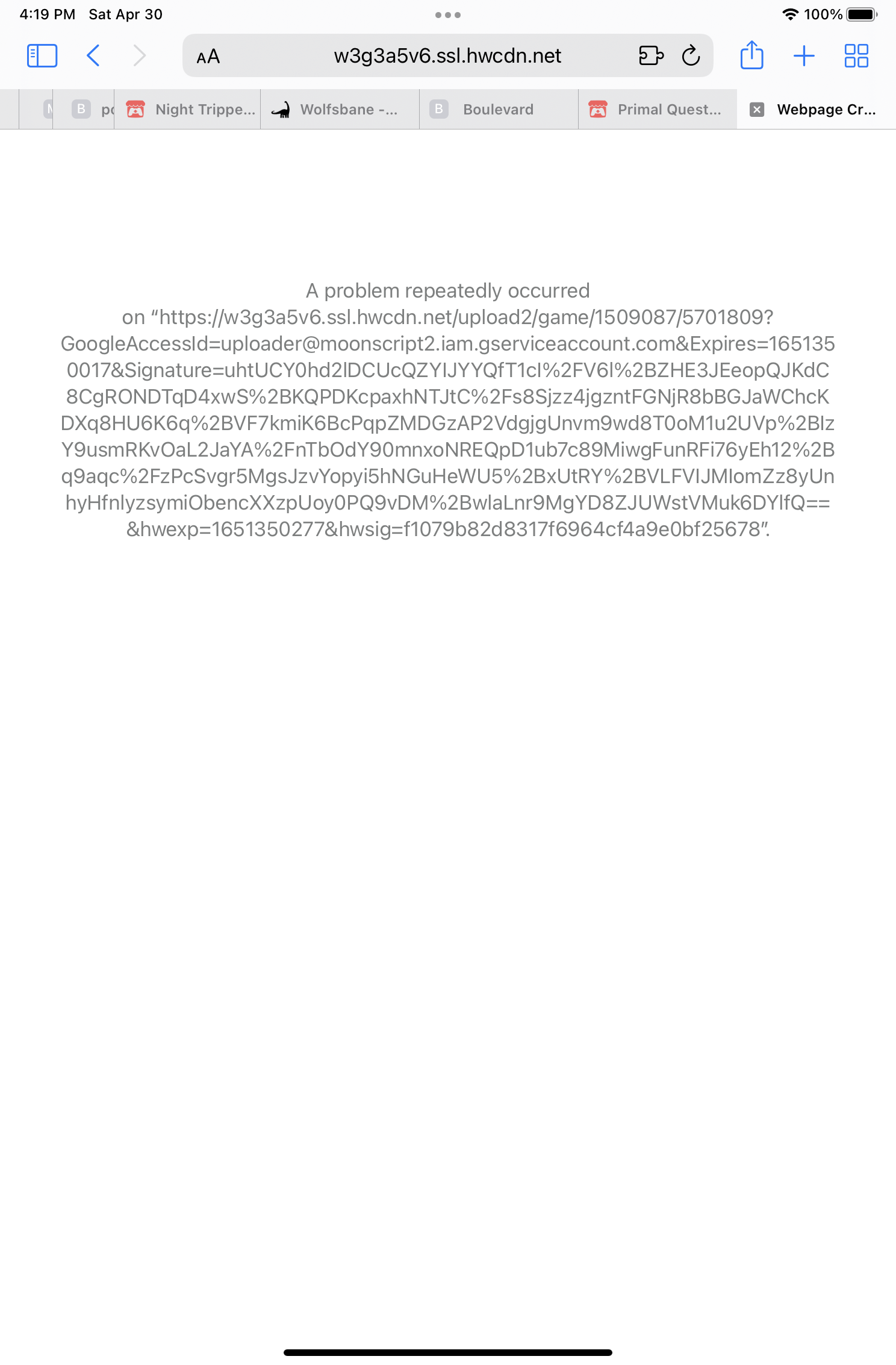 It should work now. Thank you for reporting this. 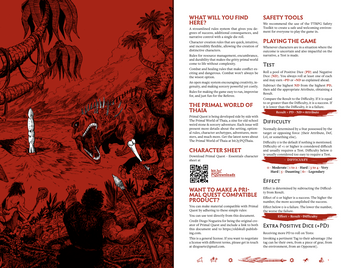 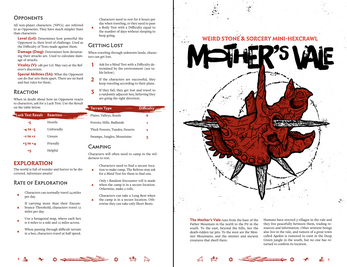 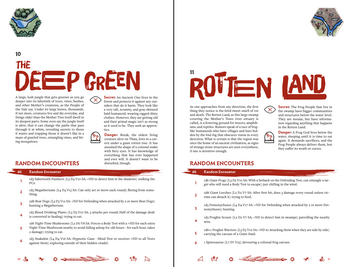