In ages past, great kingdoms covered the world. Now, their ruins dot the savage wilderness that encroaches the few decadent city-states of our current time. In this perilous world, brave adventurers bearing sharp swords and sinister spells look for glory, gold and forbidden knowledge.

What is Sharp Swords & Sinister Spells?

Sharp Swords & Sinister Spells is a rules-light, sword & sorcery, old school role playing game inspired by the original fantasy RPG and the Old School Renaissance movement as well as the stories by such authors as Robert E. Howard, Clark Ashton Smith, H.P. Lovecraft, Fritz Leiber and Michael Moorcock. With this book, you and your friends will be able to play exciting adventures with bold barbarians, witty thieves and cunning sorcerers without worrying about complex rules and tiresome preparations.

Men and women, considered brave by few, desperate by some, and insane by most. They leave the fragile security of the City-States to enter the ancient ruins in search for treasure and secrets that are better left undisturbed.

The world if Sharp Swords & Sinister Spells is an ancient one. Many civilizations have risen and fallen through the ages and not all of them were of men. Now what remains are their ruins and a few decadent City-States that live in the shadow of their former ancestors. The men and women of the current time are divided between many cultures, each with its own ambitions and rivalries.

The players’ characters are typical adventurers who seek glory, gold, ancient relics, power and other personal goals. They are not the stereotypical heroes who risk their live for the simply benefit of others. Many of their adventures put them face to face with weird things, terrible and fantastic, which are not as common place as in other fantasy genres. There are no elves in the forests. No dwarves in the mountains. Dragons and other monster are legendary creatures and, probably, unique. Sorcery is feared, respected and hated by most mortal men. The steel of his sword and the courage in his heart is all an adventurer needs to forge his destiny.

Sharp Swords & Sinister Spells was design to be a a very flexible and quick game system, with tools to generate story seeds to be used by the referee and players alike. Created to allow players to spend the least amount of time outside the actual gameplay as possible and to let them experience adventures in the style of the Sword & Sorcery tales it was inspired by, the game system has the following characteristics:

• A complete game within 48 pages. That means you can get it, read it and start playing within a few hours!

• Four basic Attributes on which all actions are based: Physique, Agility, Intellect and Willpower.

• An Archetype and Vocation system, giving complete freedom in character creation. You can be a barbarian, a knight, a ranger, a pirate, a mercenary, an assassin, a smuggler, a warlock, a druid or anything else you might want to be. There is not a definitive list of classes to limit your choices.

• A leveless spell system, allowing a spellcaster to cast any spell he can learn. The more powerful a spell is, the higher the risks of casting it though. The caster can try to cast the same spells many times, but each time he does it he is risking his body and soul. Magic is powerful but dangerous to use.

• Armor reduces the potential damage taken. It also can make you easier to hit, as the heavier suits restrict your movement.

• Characters have a Luck Die that help determine random effects in the game and allow them to cheat death.

• There is no healing magic, making every combat more dangerous. The players need to evaluate each situation before resorting to pure violence.

• Magic items are rare, unique, powerful and always charge a price for its use.

• The game comes with an Adventure Idea Generator to help referees to come up with adventure ideas, hooks, NPCs, locations and many other things

Sharp Swords & Sinister Spells rulebook has 48 pages, with everything you need to experience adventures in a savage and decadent world. It’s completely illustrated with hand picked images to inspire the reader, including many pieces draw by hand by the author. The cover art was made by the talented Annita Wright, a Brazilian illustrator.

In order to download this game you must purchase it at or above the minimum price of $3.50 USD. You will get access to the following files:

This is a great game. OSR-adjacent, with influences from The Black Hack, The White Hack, etc. I've run a fair amount of adventures with this game and it's been a blast. Also highly recommended the other games based on the same engine: "Solar Blades & Cosmic Spells" and "Dark Streets & Darker Secrets".

I've bought this on drivethru already so I know this is hella good product. Simple but effective Old School Spirit-powered game 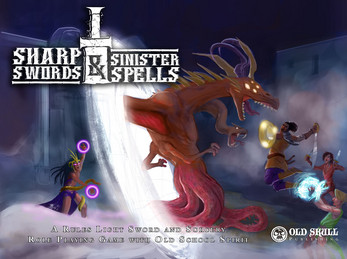