Screams Amongst The Stars

Screams Amongst the Stars is a minimalist, classically-inspired RPG about weird space horror in the frontier of known space, where organizations with conflicting interest are colonizing and exploring alien worlds. These worlds, however, are not exactly empty.

Characters in this game are spacers, people who work in colonies, space stations or on spaceships doing all sorts of jobs. They can be explorers, freighters, scientists, miners, technicians or any other occupation that would put them in space. And in space, they will find disturbing things.

These things can be flesh eating, chest busting aliens, for sure, but they can also be much weirder and terrifying things. Aliens that are always just in the horizon observing, but never truly revealing themselves. Astronomic phenomena that distort space and time. Ruins that change those that get inside forever. Can your rational mind resist these mind bending experiences?

On top of that, the game presents many different organizations, each with their own agenda and themes. And on top of all that, a complete toolkit to generate planets, ruins, weird phenomena, impending dooms and much more.

The rules that power Screams Amongst The Stars were developed based on the amazing system created for Into the Odd and perfected with Electric Bastionland by Chris McDowall. They came into being during the Game Jam he hosted called Eclectic Bastionjam. The rules themselves fit in a A5 sheet of paper, but they are incredible flexible and encourages a type of game focusing on exploration, dialogue and creativity few games can match.

I have been frustrated that Mothership has so much interesting content and I’m super into the sci-fi horror vibes, but I don’t care for the  game mechanics. So I am delighted that there is an lighter OSR game system in the reproductive rights bundle I bought! Thanks for creating this, I already like Into the Odd and this is everything I wanted from a sci-fi  variant. Even the worldbuilding provides a great foundation.

My only feedback is that you should create a printer friendly version of the rulebook. Each page is so well laid out that they would make great table aids. I want to print the rules reference on the back of character sheets, then do the same with the pages about Detachments and Ships for their character sheets. The book looks beautiful and the art perfectly sets the tone, but you wrote them so well I want to use the pages as handouts.

I can’t dedicate the time right now for a printer friendly version, but I can make a plain text version available. Would that help?

I really like the font you chose for the book, but a text only version is just fine.

I would love a plain text version. It would also be great accessibility for people with sensory issues. Great game ♡

Just wanted to say that, ever since the original crowdfunding, this has been one of my favorite systems for the genre!

I was wondering if there has been any updates to fix a few of the typos present in the original release. Also, will the staple bound versions of the zine trio ever come back into print?

Thank you. I don’t have a list of many typos, but once I identify more I can correct the PDF.

GKG has a bunch of them in print yet, but I plan a second run at the end of the year, possibly with a new sequel trilogy!

A potential sequel series is awesome to hear! Always exciting to see your new projects.

I will check out the GKG store. Those hardcopies and probably the sturdiest physical zines I've ever seen - way nicer than the POD options. It's is good to know they're still available. 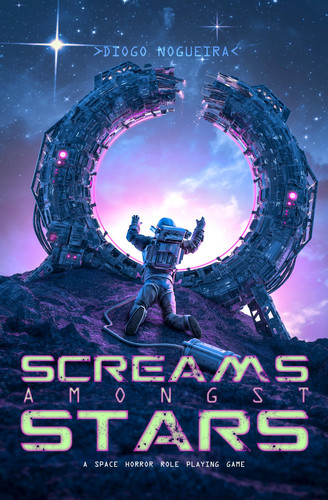