Running Out Of Time

Running Out Of Time is a  minimalist, classically-inspired RPG about survival and empathy in a dystopian cyberpunk future, where time is literally money and you only have a few days left to live, unless you start making more Time, or stealing for those that have too much.

Characters in this game are runners, people who realised the game was stacked against them and decide to act. They become mercenaries, revolutionaries, justice seeker and vigilantes. They take jobs to do whatever it takes to get more Time and share with others, or plan their own operations to steal the almost endless Time the rich have taken from all.

The game offers simple mechanics for cybernetic implants, weapons and other high tech gear, and focus on the dire situation the less fortunate have to live with. XP is based on how you spend your time, and how you share it with others.

The book brings a complete toolkit for the Referee, helping them build a Megacity, with different districts, events, sights, sounds and smells, as well as a job generator and 100 things that are happening in the game to spice things up!

The rules that power Running Out Of Time were developed based on the amazing system created for Into the Odd and perfected with Electric Bastionland by Chris McDowall. They came into being during the Game Jam he hosted called Eclectic Bastionjam. The rules themselves fit in a A5 sheet of paper, but they are incredible flexible and encourages a type of game focusing on exploration, dialogue and creativity few games can match. 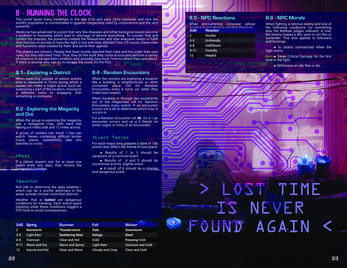 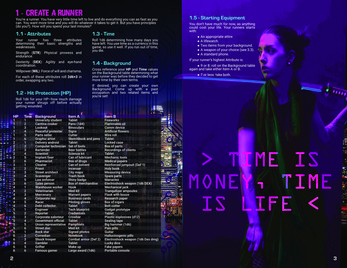 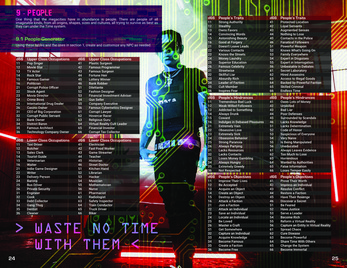