You are a dinosaur. You are a Kosmo Ranger. You are a Kosmosaur—a protector of the galaxy. You and your companions travel through the stars to help all sorts of people, planets, and organizations by preventing disasters, battling assassin robots, banishing chaos mutants from the Void Dimension, and facing all kinds of weird dangers. 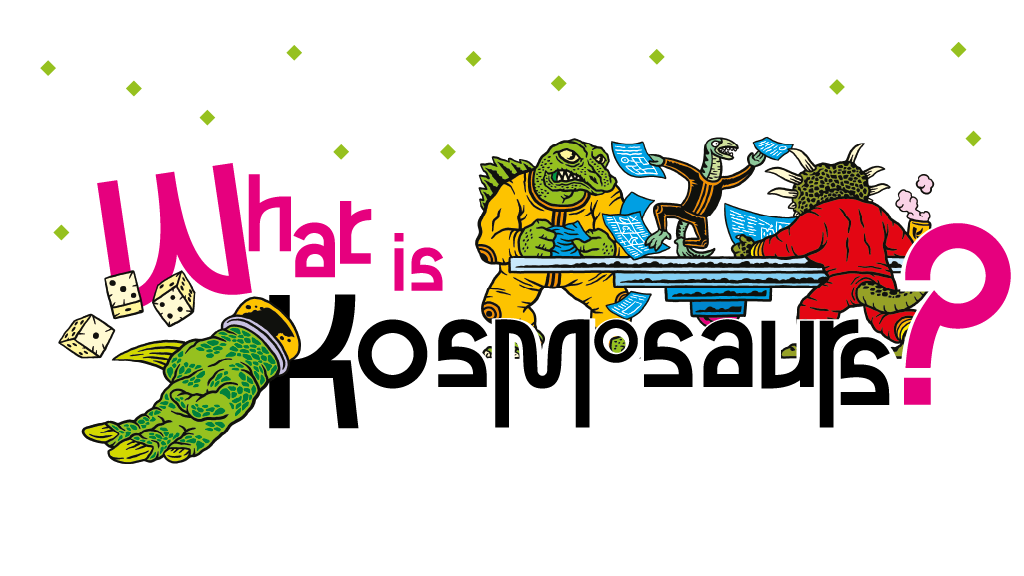 You play a Kosmosaur in this game. You're a member of an elite force of dinosaur space rangers that defend the galaxy against all forms of threats, both internal and external. You fly in your spaceships, working as a team, acting as explorers, diplomats, defenders, and, if need be, soldiers against those that would destroy what was built by the many civilizations.

The game has a minimalist action focused system with a strong narrative bent. It is inspired mainly by two John Harper's games: Lasers & Feelings and Blades in the Dark. And the setting is inspired by the fantasy sci-fi cartoons of the 80s, especially the amazing Dinosaucers.

As usual with my games, the books comes with an assortment of tools and tables to create characters, NPCs, adventures!

But that's not all!

The game is written by me, Diogo Nogueira (Ennie Award Winning game designer), with incredible art by Łukasz Kowalczuk, the amazing graphic design of Guilherme Gontijo, the fabulous character sheet design of Francita Soto, and the sharp editing of Talysa Sainz. You gotta check out this incredible collaboration!

In order to download this game you must purchase it at or above the minimum price of $14.99 USD. You will get access to the following files:

Support this game at or above a special price point to receive something exclusive.

I released KOSMOSAURS earlier than planned in an attempt to offset some of the loss I had when I got mugged (lost my cellphone where I do most of my work) and in about 24 hours this community showered me with kindness and generosity I never expected. There will always be Community Copies of this game for anyone who wants one. Thank you! I will never forget this! <3

Played this on "I Can't Believe It's Not A Podcast!" yesterday, and we had a rollicking time. Great tables, fun villains, and it made for a pretty quick game, too, which is always an advantage when recording. All in all a wonderful game, and I wish I could support it more!

I’d listen to that, got a link?

i love you book. Great rules and amazing art ! Thx for the  great work !

Checked that. Yeah, we are fixing it and a few more typos to get ready for printing...

Thanks, is it still due to be updated for printing this fall

Playing this with my children tonight! It's just the right balance of silly and epic adventure.

With such a cover reminding some underground American comics I like and such a pitch (dinosaurs in space), I couldn't miss this Kosmossaurs! The presentation of the game is just right, there is finally a nice graphic design with just the right amount of quirkiness that doesn't copy MÖRK BORG, and that's great. As for the system, it's very simple, with a bit more rules for the combat (because we have a real RPG here, so there are necessarily combat rules) and a bunch of random tables to help the GM to build a scenario quickly... So, all good? Almost, because it's strangely the character creation that I would have to criticize for being too vague: unless you're an expert in toothy creatures, it lacks an inspiring page or two to create a dinosaur that makes sense. But that's really nitpicking as the game is so exciting as soon as you read it!

This game is a BLAST! Reviewed it on my blog: https://axianspice.blogspot.com/2022/06/about-kosmosaurs.html

In page 50 it said osmosaurs instead of kosmosaurs, this make the game unplayable!

Seriously this game is fantastic and the art is gorgeous!

What an amazing game! Everything is gorgeous and full of fun

Any plans on bringing this to hardcopy?

It will be released as a hard back with a awesome screen with more art by Exalted Funeral in a few months!

What about the screenshots

Got some done. I released this earlier than planned to try to offset some unexpected financial problems. Sorry. 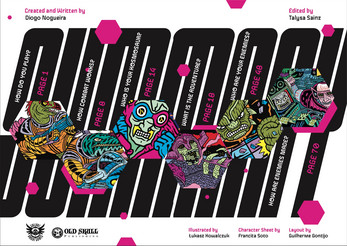 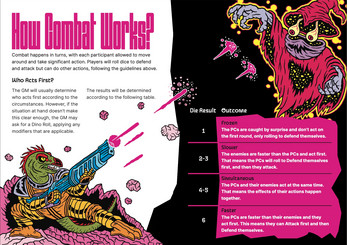 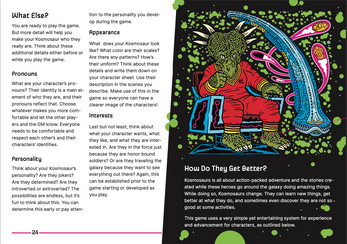 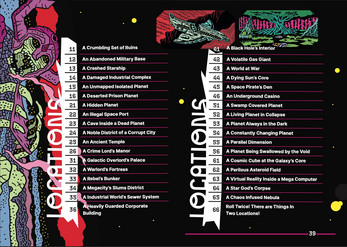 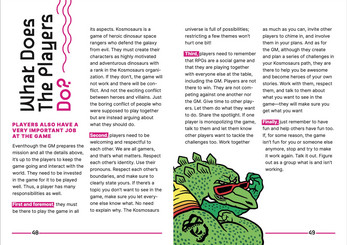 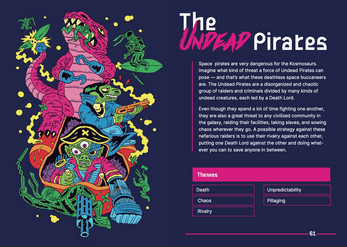 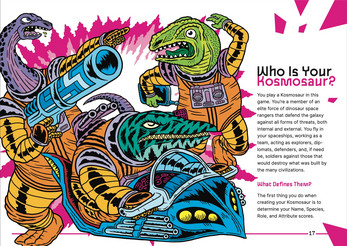